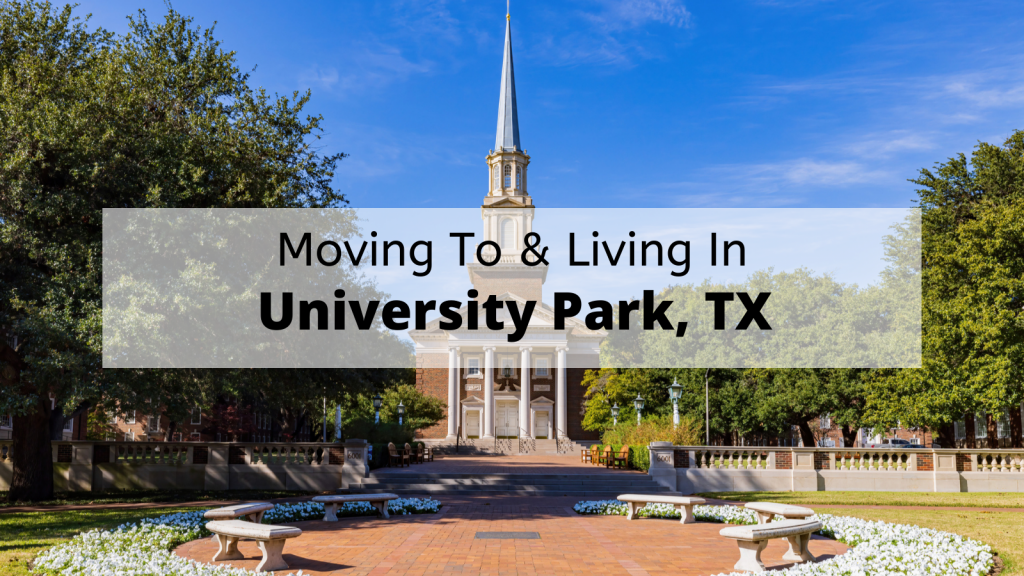 If you’re thinking of living in University Park, TX, the first thing you should know is that it’s a city within a city. Dallas, TX borders University Park to the north, east, and west. To the south of University Park is Highland Park, and just a little further south is Dallas once again.

The cities are so intertwined that the United States Post Office prefers to use “Dallas” on mail that is headed to University Park residents. Together, University Park and Highland Park are known as the “Park Cities” in the Dallas area.

University Park was originally a neighborhood within Dallas that consisted of the homes built around SMU. In 1924, the residents voted to allow University Park to become its own city. There were some efforts to reincorporate it into Dallas in the following decades. Today, it is a thriving, independent city known for its large homes, expansive churches, luscious parks, and excellent schools.

University Park’s population is 25,036 people who live across 3.7 square miles. The average age is 35.1 years, which is about the same as the demographics in the broader Dallas-Fort Worth Area. However, that is the only similarity between University Park’s demographics and the surrounding metroplex.

About 84 percent of University Park’s residents are white, followed by 7 percent Asian American, 6 percent Hispanic, 2 percent Black, and 2 percent of people identifying as more than one race. 52 percent of the population is female. The city is very conservative politically.

The median household income in University Park, TX is $224,485 per year. In Texas, this number is $61,874, meaning that University Park residents make significantly more money than their fellow Texans on average.

The city sees about 195 crimes each year, and almost every one of them is against someone’s property. Very little violent crime occurs in University Park. The most recent FBI crime statistics show no murders or manslaughter in the city. University Park employs 56 law enforcement officers to protect the residents and their property. In fact, the total crime rate is many times lower than that of the whole state. Meaning that University Park is a very safe place to live and its residents are much safer than many other Texans.

Cost of Living in University Park

Just 16 percent of the dwelling units in the city are apartments. According to Rent Cafe, apartments in University Park, TX rent for an average of $2,738 per month and have an average size of 1,106 square feet.

The cost of living in University Park is above average in other ways as well. Residents pay more for transportation, groceries, and shopping as well. However, utilities and health care costs fall below the national average.

If you love to swim and play on a hot summer day, you’ll love living in University Park, TX. July tends to be the hottest month in the area with an average high temperature of 97 degrees. Be sure to pack your swimsuit and sunglasses!

Winters are typically mild in University Park. January is the coldest month of the year, but the average low temperature is just above freezing. Bring a jacket, but don’t expect too much snow.

Things to do in University Park, TX

After the end of a President’s time in office, an educational center is built in their name. The George W. Bush Presidental Center is located on the SMU campus and is one of the biggest places to visit in University Park, TX. Browse the museum to see memorabilia from 9/11 and a full-scale replica of the Oval Office.

This museum on the SMU campus is dedicated to the arts and culture of Spain. Exhibitions are routinely changed, so there’s always something to learn. The Meadows Museum also hosts some of the most exciting events in University Park, TX. Learn to draw from famous artists, enjoy screenings of important films, and more.

Are you looking for things to do with kids in University Park, TX? The city offers several parks that are primed for playing. Elena’s Children’s Park is perfect for holiday pictures. Caruth Park features ponds for fishing, playgrounds, and ball fields. Check out Goar Park for plenty of outdoor space to run free.

University Park’s location makes it great for enjoying all the other amazing offerings in Dallas.

More things to do near University Park:

Where to Eat in University Park

This University Park, TX eatery is known for its fried chicken and other southern staples. All of the food is made fresh in small batches, so you know you’re getting fresh home cooking. Known simply as “Bubba’s,” this restaurant in University Park has been serving Dallas for more than 41 years.

Original Chop Shop serves up healthy, delicious food in University Park. Patrons who are avoiding gluten, dairy, lactose, soy, or animal products find plenty of options here. Grab a protein bowl made with your choice of vegetables and protein, or opt for a superfruit bowl with acai, granola, and more.

This University Park eatery promises “upscale food with a down-to earth feel,” and it delivers on that promise. The Front Room Tavern offers breakfast and dinner every day of the week, or you can stop by for brunch on the weekends. The dinner menu includes options like blackened chicken alfredo and brown butter steak.

SMU is one of the largest employers in University Park, TX. However, many people live in University Park and work in Dallas or surrounding areas. Dallas’ thriving economy includes job opportunities in high-demand sectors like healthcare, oil, and technology. Due to the high home prices in University Park, many residents are highly paid professionals or have generational wealth.

Public schools in University Park are part of the Highland Park Independent School District (HPISD). The small and prestigious district is home to about 7,000 learners and 440 teachers. Great Schools ranks all of the schools at least an 8 out of 10, with some getting the highest rankings possible. The school system boasts encouraging statistics, including:

Find your own fun things to do in University Park with this interactive map.

University Park is a well-to-do area within Dallas. If you’re thinking of living in University Park, TX, there are a few important factors to consider: