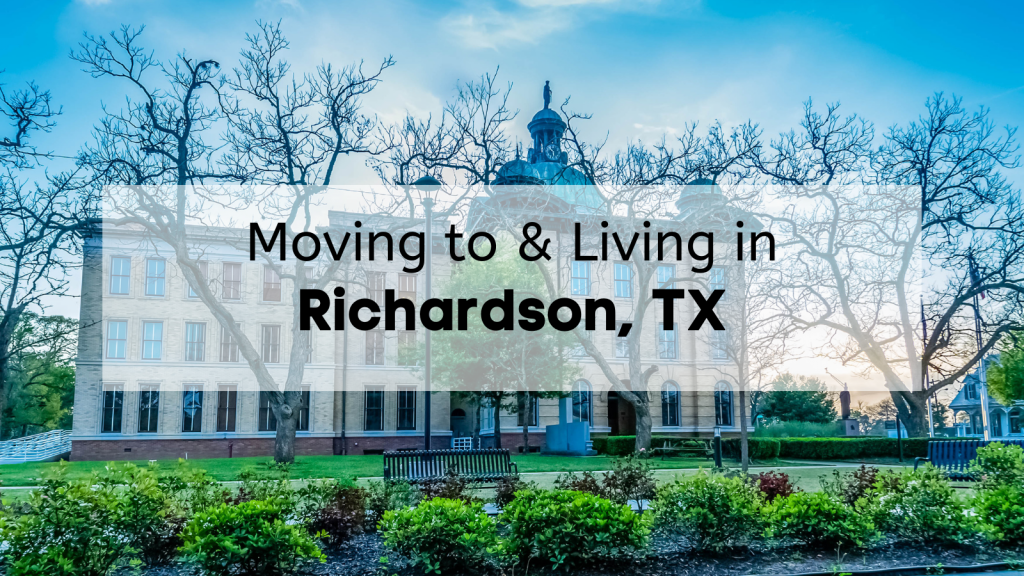 Richardson is known for being home to some of the largest telecommunication companies in the world, like Verizon, AT&T, and Cisco Systems; Richardson’s nickname is “The Telecom Corridor.” In addition to the telecommunication industry, Richardson, TX, has more than 5,000 total businesses within its square miles. The city boasts countless shopping destinations and outlet malls and hosts the Wildflower Arts and Music Festival.

Richardson originally became incorporated in 1925 but now is a home rule city. Many people look up the City of Richardson’s website by searching the word “Cor”. Currently, Richardson is led by a council/manager form of government. With the benefits of suburban living yet reaping the benefits of still being close to the heart of Dallas, you get the best of both worlds when living in Richardson. As such, Richardson Texas is a nice place to live.

What county is Richardson, TX in? Richardson is in Dallas and Collin County and is known for being an “inner suburb” of Dallas. Some of the surrounding Richardson cities are Dallas, Plano, and Garland.

The city of Richardson has plenty of undeveloped lands, along with farmland, commercial lots, and residential areas. This large Dallas suburb is a great place to live if you want to live outside of the big city while still being close to downtown Dallas for shopping, restaurants, fun activities, and a very family-friendly community. It’s 14 miles from Richardson, TX, to Dallas, TX.

A few of the most notable people from the Richardson area include Barry Watson, Jensen Ackles, and Bill Engvall.

The major highways in Richardson are Interstate 635, US Highway 75, and State Highway 190.

Richardson TX, has a variety of public transportation options. The most common forms of transportation are the Central trail (a biking and walking trail next to the DART line), light rail, or the Dallas Area Rapid Transport, or DART.

Richardson is also a bike-friendly community through the League of American Bicyclists and has designated bike lakes to keep everyone safe. Currently, there are 15+ miles of bike lanes throughout the city.

The closest airport to Richardson is the Dallas Love Field Airport (DAL/KDAL), and it’s 13 miles away.

Cost Of Living In Richardson

The cost of living in Richardson, TX, is 11.7% higher than the national average. Richardson is considered an affluent area to call home. It’s more expensive to live here than many places in Texas and housing and rental costs are a significant amount of the cost of living. According to the Economic Policy Institution, a family of four would need to make around $78,429 per year to live comfortably. The MIT calculator estimates that a single adult without children needs to make $17.82 per hour, and the amount needs to increase if you get married or have children.

In Richardson, housing prices are above the national average by 25.9%. While the cost is high, there is no state income tax, which can help balance out the cost of living for purchasing a home.

The median home price in Richardson, TX, is $445,000. The most common style of houses includes contemporary, traditional, farmhouse, and ranch-style homes. Here you can browse Richardson, TX homes for sale. If you’re curious about the price difference between a single-family home, condo, and a townhouse, here’s an approximate breakdown of the median sale price for each category:

According to RentCafe, the average rent in Richardson is $1,804 for a 928 square foot apartment, but the price can change depending on the number of bedrooms, bathrooms, and amenities.

Richardson Neighborhoods | Where To Live In Richardson

In Richardson, Texas, there is a mixture of an urban and suburban feel. While the area of Richardson tends to lean more towards the suburbs, with its close proximity to big cities like Dallas, you can still reap the benefits of urban life without living in a large city. There are a lot of parks and kid-friendly activities, making Richardson a family-friendly place to live.

While Canyon Creek South is a small neighborhood, it’s known for being one of the best places to settle down due to it being a family-friendly community, having plenty of spaces to explore and parks for kids to play after school, like Cottonwood Park, Heights Park, and Custer Park.

In Richardson, there is an average of 33.4 inches per year and zero inches of snow. The best time of year to visit Richardson, TX, is from May to September.

Food is a love language. Here are some of the best restaurants in Richardson, TX!

With a one-of-a-kind culinary experience and genuine southern hospitality, Jasper’s serves food with fresh ingredients grown locally, and every menu item is made from scratch. Some of the most popular items include the backyard brisket cheeseburger, the caesar salad, hyplains rotisserie prime rib, Godiva chocolate martini, and baby back ribs.

Since 1977, The String Bean restaurant & bar has been serving the community of Richardson with delicious appetizers, health-conscious entrees, hamburgers, sandwiches, and seafood, and mouthwatering desserts. They have everything from daily specials, brunch, catering, and bulk orders.

Pappadeaux Seafood Kitchen has been serving fresh seafood since 1986. Whether you’re coming in for the classic Pasta Mardi Gras, a cocktail to unwind from the day, a limited-time dessert, or something new on the menu, Pappadeaux is sure to please your palate.

Things To Do In Richardson

Richardson, TX, has plenty of fun things to do, attractions to see, museums to visit, and shopping centers to shop at till you drop!

Are you looking to go back in time and play all your favorite fun video games from your childhood? Free Play Richardson has almost every game imaginable–they’re preserving the arcade entertainment experience for decades to come!

Axe throwing has been becoming more popular throughout the years, and it’s a must do in the community of Richardson.

Have a need for speed? K1 Speed is the top indoor go-karting arena in Richardson, TX. All of the go-karts are electric. No reservations are required, so what are you waiting for? Come on down!

The Great Room Escape has the BEST escape rooms in Richardson, Texas! Some of the most popular and unique rooms include escape the 80s, zombie room, and countdown. If you’re looking for a fun family-friendly activity, then go to Great Room Escapes.

The Richardson Farmers Market has a variety of local vendors, artists, and small businesses coming together to create memorable events for the community.

With three different performance areas, the Charles W. Eisemann Center has everything from galleries to ballet performances to vocal concerts.

Need a good laugh? The Backdoor Comedy has stand-up comedy every weekend (Friday and Saturday) and open mic nights every Thursday!

With 37.25 acres, Prairie Creek Park has plenty of space to have a picnic, go hiking, and play on the grass, making it a family-friendly activity.

If you’re looking for a park with 25 acres, a couple of lakes, tennis courts, a sand volleyball court, a hiking trail, a basketball court, a swimming pool, and a playground, Cottonwood Park is the place for you!

Richardson Heights Village has everything you could ever want in a strip mall! With its large variety of retailers, boutiques, restaurants, and even a movie theater, Richardson Heights is your one-stop shop for your next shopping trip!

Discount clothing stores, chain retailers, department stores, and home improvement stores are just a few examples of what you can find at Richardson Square!

Map Of Richardson Things To Do

In addition to a successful professional sports presence, Texas has plenty of colleges with excellent sports teams. For example, the University of Texas-Austin was named the “Best College Athletics in Texas,” which is only a 3-hour drive from Richardson, so if you’re looking for a college close to home with a great athletics program, then this university is perfect for you.

To put things into perspective, here’s a breakdown when it comes to Richardson’s crime rate and how it compares to nearby cities:

Overall, Richardson is a very safe city to live in and is ideal for young professionals, families, and retirees. There are 165 sworn officers in the Richardson Police Department who serve and protect the community of Richardson, TX.

The largest industry in Richardson is Telecommunication, and the three top employers include State Farm, Blue Cross Blue Shield, and Raytheon.

According to Payscale, the average base salary in Richardson, TX, is $75,000 per year, and the hourly rate is $19.49. If you need a job, don’t worry because on Indeed, within a 25-mile radius of Richardson, there are 120,627 available jobs. If you’re looking to work for the City of Richardson, TX, there are current job openings.

Richardson, TX, is part of the Richardson Independent School District. The state of Texas has started an accountability rating, so each year, the schools will receive an overall score based on their performance. When it comes to Richardson ISD, they have received an overall rating of 84%, which is consistent with other local school districts like the Ponder Independent School District.

Top-performing schools that received the highest scores in the Richardson ISD:

There are plenty of community colleges near Richard, TX, such as Richland College, Brookhaven College, Dallas College, and Eastfield College.

If you need to check out a book, the Richardson, TX, Public Library has everything you need.

Are you interested in moving to Richardson, TX? Brothers Moving & Storage is here to help make your transition seamless. As a hardworking, dedicated, trustworthy, and affordable Richardson moving company, our team of relocation experts will be here for you every step of the way. Call us at (469) 000-0000 for a free estimate!