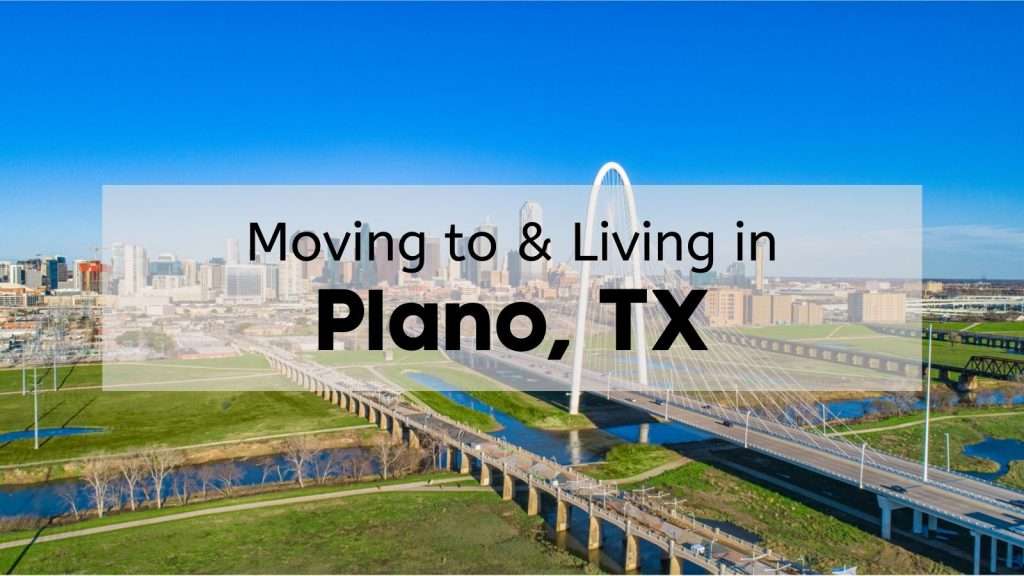 Part of the Dallas-Fort Worth metropolitan complex, and located in Collin County, Plano is a large city that acts as something of a complement to Texas’ capital. Known by its nickname, “City of Excellence”, Plano is known as a more affluent area than her sister cities, with nicer properties, more specialized industry, local headquarters for many large corporations, and safer communities. It’s no wonder that many moving to the Dallas metroplex area choose to make their home here if they have the means!

Plano had its beginnings as something of a backwater, a stretch of unwooded and uninhabited area first settled by Europeans in the 1840s. The construction of a sawmill, gristmill, and a single general store eventually brought in a number of people. The name, “Plano”, was decided upon as it was the Spanish word for “flat” – the area is quite flat indeed!

In 1872, Plano’s growth was further bolstered by the completion of the Houston and Central Texas Railway, and Plano was incorporated in 1873 into the state of Texas. Within two years, the population was over five hundred souls. This growth was briefly hampered in the 1880s, when a devastating fire ripped through the town, but the community was quickly rebuilt and continued to flourish.

After World War II, the entire Dallas metroplex felt an economic boom, including Plano. The population exploded, and it continued to grow exponentially as many companies moved their headquarters to the city. Much of the city’s current character owes itself to this period. Among the stream of professionals moving into the area, Chinese businessmen and their families came in large numbers, making Plano one of two major concentrations of Chinese-Americans in Texas. Today, Plano is a professional city with a unique flavor and culture.

The number of notable people who live in the city is almost too many to count. Among them are actress Arden Cho, actor Chace Crawford, businessman Ros Perot, NFL player John Leake, chess grandmaster Jeffery Xiong, and many, many more.

The city of Plano has a population of 288,870 distributed out over 71.7 miles at a population density of about 4,000 people per square mile. The median age here is 38.9, which is a few years higher than the Texas average of 34.8. The median household income in Plano is $96,348, with almost half the population making $100k annually or more.

The three majorities in Plano demographically are White, at 51%, Asian, at 22%, and Hispanic, at 15%. 27.4% of Plano’s population are foreign-born, with the vast majority of the foreign-born population coming from Asia, China specifically. Plano’s gender ratio is slightly skewed towards women, at 51%.

Overall, Plano is a safe community, especially when it comes to violent crime. Property crimes are a bit higher, but that’s a common trend among communities of all types, and they are still well below the national average. Plano is served in law enforcement matters by the Plano Police Department, staffed by 585 police officers.

Cost of Living in Plano, TX

Although certainly an affluent community for the state, Texas’ general affordability will make this area not so expensive when compared to other affluent communities around the country. The cost of living here is 7% higher on average than other places in America, according to Payscale. The median price for a home in Plano is $341,800, nearly double the average home price in Texas, which is $187,200.

For basic costs, utilities here actually cost marginally less than the national average, but all other typical costs, such as groceries, housing, and transportation have a cost at or slightly above the average. Housing will no doubt be the most expensive part of moving to Plano, being 21% more expensive than the national average. The average utility bill in Plano is  $164.14 per month.

Here are some common items you might buy, and their prices according to Numbeo:

Prospective residents from outside the state will be glad to hear that Texas has no property tax or income tax. However, Plano does have a sales tax of a minimum of 7.5%.

Want to figure out how to get yourself into, out of, and around Plano? Being adjacent to Dallas, public transportation services like buses, light rails, and more are all serviced in the area by the Dallas Area Rapid Transit system. The DART light rail has two lines running through the community, the Orange and Silver lines, and Plano has a robust system of multi-lane highways for automobile transport. Employees in Plano have an average commute time of 24 minutes.

If you or a family member are looking to get into higher education, you’ll have a number of options. For instance, both of the campuses for Collin College are in the city, which is a community college for those looking to earn an associate’s degree. For bachelor’s degrees and beyond, there’s also a local branch of the Dallas Baptist University. You’ll not be starved for options here!

Despite regularly being thought of as one big desert, Texas’ south-eastern portions are relatively humid and forested, including the area of Dallas and Plano. Expect a more humid, Southern climate than one you might get out west. You can expect lows of 38 degrees Fahrenheit during the winter months, and highs of 95 degrees Fahrenheit during the summer months. Plano experiences more than the average amount of rainfall when compared with the rest of the United States, with 41 inches per year as compared to 38. Meanwhile, Plano experiences very little snow, with only 2 inches annually. The best times to visit Plano, in terms of comfort rating, are March and November. The coldest month is January, and Plano is a high tornado risk area, typically being subject to three a year.

Best Neighborhoods | Where to Live in Plano, TX

Plano’s neighborhoods are varied, distinct, and that means that no matter what kind of person you are, there’ll be a community here for you! No matter which of Plano’s beautiful neighborhoods you choose to settle down in, you’ll still have all the benefits of Plano’s city life. Check out some of the best places to live in Plano below:

As a planned and recently developed area, Plano has lots of new construction communities to pick and choose from. For instance, the Avignon neighborhood was constructed between the years of 2006 and 2015, with the 230 homes contained within often going for anywhere between $500,000 and $1.2 million, with reasonable acreage. The King’s Ridge planned community was also developed around the same time frame, and has similar prices and acreage for properties.

If you want something even fancier, the White Rock Creek Estates might be your answer. Around sixty or so homes, all large, luxury properties that typically sell for $900,000 to $1.5 million. The larger Lakeside on Preston neighborhood has quite a range of price among its five hundred homes, with the most luxurious clocking in at $1.8 million.

Plano gets a 87 on Redfin’s competitiveness scale, making it a very competitive area, and for good reason. Plano is not only a lovely and safe city full of industry, but also has relatively low housing costs, compared to other metropoli around the country.

The median sale price for Plano homes is $518,000, which, while certainly not cheap, is a decent, middle ground price for a big city. The number of houses sold yearly, meanwhile, has been decreasing by 26%, with the last three years being marked by 204 sales. The median days on the market is also trending downwards, decreasing by 7 days in the last three years for an average of only 12 days.

41% of Plano residents rent their homes, a fairly low number for most big cities in the US. Renting here is, as you might expect, fairly middle of the road in terms of price, with the average monthly rent for all units being $1,724.

If you want to make yourself a part of any of these communities, you should check out the latest listings for homes for sale in Plano, TX.

Those planning on making a living in Plano should know that wages and cost of living have both been increasing, according to Payscale. The most popular positions of employment are Software Engineer, Senior Software Engineer, and Software Developer. The largest employers in the area are J.P. Morgan Chase & Co., Techmahindra Ltd, and Capital One Financial Corp.. The average salary for a worker in Plano is $82k a year, while the average hourly wage is $19.96.

Plano is a city of modern industry. Be assured that no matter what sort of specialization you have, you can find a job easily here! Check out the latest listings for jobs in Plano, TX here.

Things to Do in Plano, TX

With a city like this, there can be little doubt that there’s plenty to do, see, buy, and eat, whether that be with your family or with your friends. You should check out some of the best things to do in Plano, TX below:

Places to Eat in Plano, TX

Alongside its host of things to do, Plano is also home to plenty of great eats! Check out some below:

A chain local to the northern Texas area, Whiskey Cake offers brunch, lunch, and dinner, and is most well known for its extensive menu of classic whiskey cocktails. There’s a reason Plano locals love this place!

Haywire is a uniquely configured restaurant, offering a different experience on each of its three floors. The first is a whiskey bar, the second is a dining area, and the roof is a patio. In this unique environment, you’ll be treated to excellent new American dishes and plenty of great drinks!

A chain that has sporadic locations across the south-western US, this restaurant and lounge specializes in global fare, including everything from Chinese to Italian dishes. If you want a varied menu, come to this Plano restaurant!

As mostly a professional community, Plano isn’t very well known for its sports, but don’t let that make you think there’s nothing for the sportsman here! The local college teams from DBU, known collectively as the Patriots, do operate here, although most of the big games are played in stadiums outside Plano’s limits. According to Plano’s official website, the city contains hundreds of courts and fields for sports, golf courses, swimming pools, and two ice skating rinks. The active individual will not be neglected in this community!

There’s plenty to love about the city of Plano! Want to make your new life there? Give Brothers Moving & Storage a call at 469-000-0000! We have a crew of highly-trained and professional Plano movers who will ensure your move is as easy as it can possibly get! Call now or fill out our online form for a free quote!