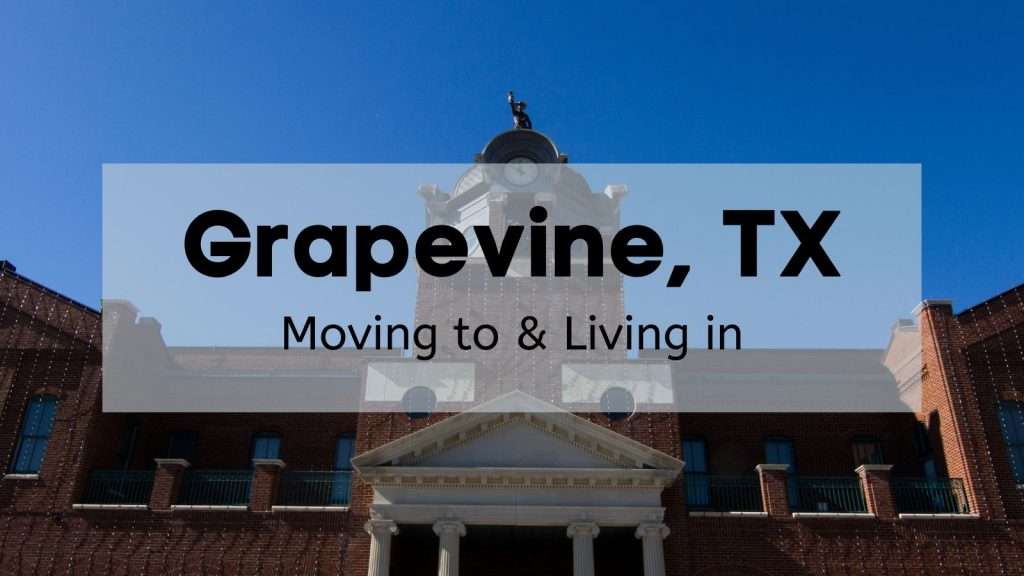 The city of Grapevine, so named owing to the wild grapes that grow in the area, is a very affluent suburb of Dallas city in Tarrant County between Dallas and Fort Worth. Adjacent to the Grapevine Lake, an immense reservoir with a beautiful shoreline, living in Grapevine is among the best experiences in the entire metropolitan area! Grapevine got its start in the 19th century, where it was the site of a negotiation between General Sam Houston and a number of Amerindian tribes, which allowed European homesteaders to enter the area and start the community proper. For most of its lifetime, Grapevine relied solely on agriculture for its economy, but after WW2 and the opening of the Dallas-Fort Worth Airport in the ‘70s, its economy and population boomed, and Grapevine is now known for a wide variety of wineries and vineyards, as well as special events, such as their many Christmas events, which have lead Grapevine to be called the “Christmas capital of America”. If you’re intent on moving to Grapevine, you won’t be disappointed!

Where is Grapevine, TX?

Grapevine is in Tarrant County, positioned about a half-hour northwest of Dallas. Grapevine is located within the Dallas-Fort Worth-Arlington, TX metro area, and is bordered by Irving, Flower Mound, and Colleyville. The distance from Grapevine, TX to Dallas, TX is 26.9 miles.

Grapevine is renowned for its public and private transportation, with the main claim to fame of the area being the Dallas-Fort Worth International Airport. Another unique Grapevine method of transportation is the Grapevine Vintage Railroad, which while slow, provides passage throughout the Cotton Belt Railroad area. Grapevine also has complimentary shuttles, bike routes, and more in the way of public transportation.

Notable people from Grapevine include rapper and vocalist Post Malone, singer and songwriter Demi Lovato, actress Jaimie Alexander, and singer Norah Jones. You’ll be living amongst quite a crowd in Grapevine!

Is Grapevine, TX safe? While there are some issues with property crime, Grapevine is a very safe community to live in! According to Areavibes, Grapevine’s overall crime rate is 3% lower than national average, with 1,282 crimes annually per 100,000 people. The property crime rate is 7% higher than the national average, while the violent crime rate is 55% lower. Simple best practices regarding securing your property will alleviate most of the problems with crime in Grapevine. The community of Grapevine is served by the Grapevine Police Department, which has 96 sworn officers.

Cost of Living in Grapevine, TX

According to the Economic Policy Institute, a family of four will need a yearly income of $78,434 to live here.

If you want to make yourself a part of this community, you should check out the latest listings for homes for sale in Grapevine, TX.

Want to know what sort of daily expenses you’ll be paying in Grapevine? Check out these everyday expenses for Grapevine, provided by Numbeo.

Grapevine is well known for its wide variety of 19th and early 20th century restored homes. However, there’s also plenty of newer homes and communities in Grapevine, Texas as well. See just a few of Grapevine’s excellent neighborhoods below:

High Point Farm Estates – One of Grapevine’s Most Affluent Neighborhoods

With a plethora of relatively recent homes built from 2003 to 2005, Lakeview Estates’ home prices vary from $350,000 to $500,000, which is middle of the road for the Grapevine area. Qualifying for excellent school districts and having decently sized homes at reasonable prices makes Lakeview Estates a competitive Grapevine neighborhood.

Walker Farms’ property prices vary from $650,000 to $850,000, putting it up there with High Point Farm Estates as some of Grapevine’s most valuable property. Properties here are large, and recently built, meaning they’re in great condition! Just like the rest of Grapevine, this neighborhood also qualifies for great schooling.

According to the Koppen Climate Classification, Grapevine is a humid subtropical climate. It rains semi-regularly around here, but hardly snows, and it tends to be very hot in the summer. You can expect lows of 35 degrees Fahrenheit during the winter months, and highs of 95 degrees Fahrenheit during the summer months. Grapevine gets precisely the average amount of rainfall for the United States, with 38 inches per year. Grapevine experiences almost no snow, with only one inch annually. The best times to visit Grapevine, in terms of comfort rating, are April and October.

Grapevine and her neighbor cities of Dallas and Fort Worth don’t generally experience extreme weather, outside of heat waves that can ratchet temperatures up to 113 degrees Fahrenheit or more.

Things to Do in Grapevine

Grapevine has a historic and renovated downtown.  This is a place to meet up, enjoy amazing places to eat, shop or simply watch people. There is a new development named Grapevine Main to also check out.

Sea Life is an excellent aquarium right inside the Grapevine area. The exhibits here are sure to amaze adults and children alike, with one of them even having a walking tunnel underneath one of the pools!

Who doesn’t love LEGOs? Sure to be a hit with the kids, the LEGOLAND Discovery Center offers toy shops, displays, rides, and 4D films.

One part resort, one part amusement park, the Great Wolf Lodge is a truly mind-blowing Grapevine attraction. The water park itself is over 80,000 square feet, and there are plenty of land-based attractions as well! This is the perfect place to spend a weekend!

Grapevine is renowned for its wide variety of Christmas events – be sure to keep an eye on that community calendar during the holiday season!

Places to Eat in Grapevine, TX

Alongside its host of things to do, Grapevine is also home to plenty of great eats! Check out some of the best places to eat in Grapevine, Texas below:

Eat fantastic Tex-Mex dishes in this upscale restaurant set in a historic home! Also be sure to check out the great margaritas and sports bar as well.

Grapevine is pretty far inland, but Pappadeaux provides luxurious and delicious seafood dishes in the classic Cajun style, sure to scratch any seafood lover’s itch!

Grapevine is mostly served by the Grapevine-Colleyville Independent School District, also known as the GCISD. The district services 11 elementary schools, 4 middle schools, and 2 high schools. The northwestern portion of Grapevine is served by the Carroll Independent School District. Both are excellent school districts, and many parents choose to move to the area to be put into them!

Students and others in Grapevine are served by the Grapevine Public Library.

As a crossroads between Dallas and Fort Worth, containing the Dallas-Fort Worth International Airport and large tourism and travel industries, Grapevine is packing an economic powerhouse in a relatively small package! According to Payscale, the most popular positions of employment are Project Manager, Operations Manager, and Financial Analyst. The most popular employers in Grapevine are GameStop Corp., Toll Brothers, Inc., and Cotton Patch Cafe. The average salary for a worker in Grapevine is $68k a year, while the average hourly wage is $17.52.

See the latest openings for jobs in Grapevine here.

Explore Grapevine’s large variety of things to do, places to eat, and more with this map!