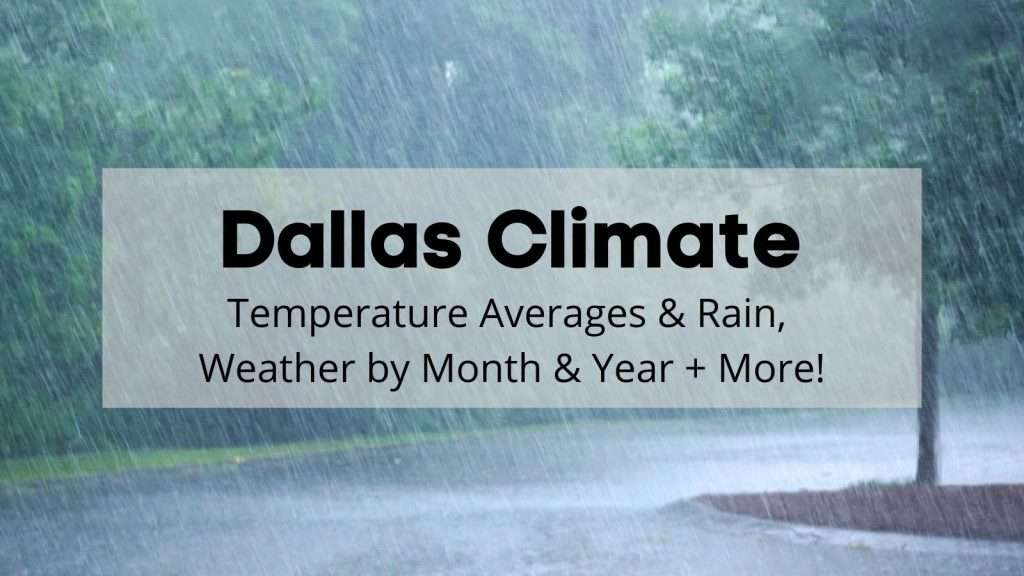 As one of the biggest cities in Texas, Dallas is known for being home to the Dallas Cowboys football team, a thriving arts district, great restaurants, and major companies across the finance and telecommunications industries. According to the 2020 Census, the population of Dallas is 1,288,441.

The city is located in the northern part of the state. It is situated 32.4 miles east of Fort Worth, 20 miles south of Plano, and about 82 miles from the Oklahoma state border. Due to its location in the south central portion of the country, Dallas is also well-known for its hot temperatures, frequent severe storms, and sunshine. It is also subject to lesser occurring weather events, such as ice and snow.

Dallas is classified as having a humid subtropical climate. According to the Köppen climate classification, weather in this climate type is characterized by “hot and humid summers, and cool to mild winters.” The term “climate” refers to long-term yearly weather patterns, whereas the term “weather” refers to the short-term, always changing conditions that occur on a daily basis (e.g. rain, temperature).

A post shared by State Fair of Texas (@statefairoftx)

Dallas is known for having two seasons — a hot season and a cool season. The hot season lasts between June and September, whereas the cool season covers all other months during the year. Located in Tornado Alley, Dallas residents always need to be aware of the risk of tornadoes. Tornadoes most frequently occur during the springtime months — between March and May.

Fall through spring, Dallas experiences comfortable temperatures. During the chilliest month of the year (January), the average high temperature only dips to a mild 56°F (with an average daily low of 39°F during the same month). Dallas summer temperatures are extremely hot, and extend from June through September.

Spring is the start of the rainy season in Dallas. Extending from April until the fall months, residents should always have an umbrella and raincoat on-hand. Average Dallas annual rainfall is 39.1 inches.

Because of the increase in rain showers, this is also when the city begins to see trees, flowers, and local plants come to life. Bright and blooming, springtime in Dallas is nothing shy of breathtaking. It is a wonderful time to visit the area, as temperatures are comfortable and humidity is lower than it is during the summertime.

Average humidity in Dallas is highest during the months of June, July, and August. Summer months in the city are known for being sweltering and muggy. Is it the hottest season of the year, with the highest average temperatures occurring during August. The muggiest part of the summer occurs between June and July.

Because of the consistently hot temperatures, one of the best ways for Dallas residents to beat the heat is by going swimming, and spending time participating in indoor activities.

After the heat of the summer starts to subside, residents welcome autumn in Dallas with open arms. Cooler temperatures and lower humidity means that it is once again comfortable enough to spend extended periods of time outdoors. Early fall has some of the most comfortable weather in Dallas, making it a great time to visit the city.

The best time to see fall foliage in Dallas is during the month of October. Throughout the entire month, and into November, leaves change colors and begin to fall. One of the most popular events in Dallas during the autumn is the State Fair of Texas.

Dallas winter weather can bring with it a mix of showers, ice, freezing temperatures, and even a snowflake or two.

There is annual snowfall in Dallas. On average, the city receives one inch of snow per year. However, there are plenty of things to do in Dallas in winter, since temperatures remain mild during the day and night. Popular Dallas winter events include the Dallas Zoo Lights, and Prairie Lights at Grand Prairie. 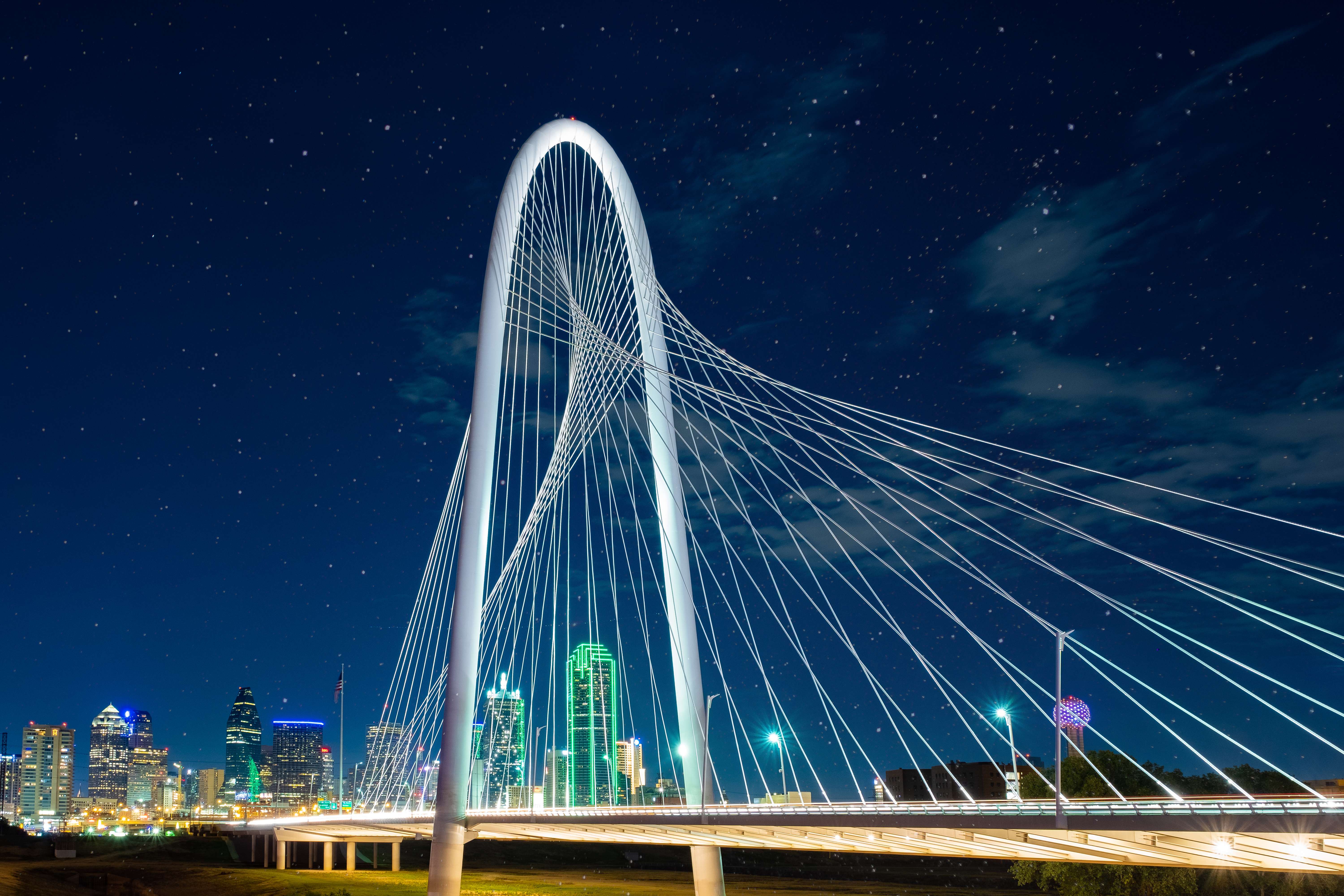 In terms of the daily high, the average temperature in Dallas in January is 56°F. Average lows reach 39°F. January is the coldest month of the year in Dallas. It is also the month with the lowest average precipitation during the year.

The average temperature in Dallas in March is 58°F. Highs often reach the high 60s and low 70s, making it an exceptionally pleasant time of year to visit. One of the bigger events in the city — the St. Patrick’s Parade & Festival — happens every March.

The average temperature in Dallas in April is 66°F. Average highs hover around the upper 70s, with lows in the upper 50s. This is a fabulous time to see flowers in bloom throughout the city. April is also the month that Dallas Arts Month is held.

May kicks off the rainy season in Dallas. The average temperature in Dallas in May is 74°F. During the day, residents enjoy warm temperatures in the 80s, with lows in the mid-60s.

June is when both the temperature and humidity begin to rise significantly. The average temperature in Dallas in June is 82°F. Highs start to top 90°F on a consistent basis, whereas low temperatures are often above 70°F.

One of the hottest months of the year in Dallas is July. The average temperature in Dallas in July is 85°F. Highs are often in the mid-90s, with heat indices topping 100°F on a frequent basis. Evenings are also hot and humid, with lows in the upper 70s.

August is the hottest month of the year in Dallas. The average temperature in Dallas in August is 86°F. Highs are almost always in the mid-90s (or higher), and lows approach the high 70s. Humidity levels are also excessive during this month.

October kicks off the start of the driest months of the year in Dallas. The average temperature in Dallas in October is 68°F. Average highs are near 78°F, and average lows dip into the upper 50s.

Cool and chilly weather starts to set in during the month of December. The average temperature in Dallas in December is 48°F. As the official start of winter, this is also the time when Dallas can see light snowfall.

Situated in Tornado Alley (the area of the country that is most prone to tornadoes), Dallas is no stranger to extreme weather. As part of the severe storms that the area experiences, flooding has also been an issue in the city.

In the late 1800s and early 1900s, flooding along the Trinity River led to several historic weather events. In May of 1908, the river experienced extreme flooding that caused an estimated $2.5 million in damages. More recently, Dallas received a record-breaking 16.96 inches of rain in May 2015.

Tornadoes have also caused extensive damage to various locales around the city. One of the most powerful tornadoes to have ever hit the area was an EF-4 (near Garland) in 2015. This extremely strong tornado was part of a rare winter storm that caused a full-blown tornado outbreak. On multiple occasions, Dallas has also experienced strong EF-3 tornadoes (most recently in 2019).

Although powerful tornadoes are relatively rare in Dallas, there are plenty of EF-0 through EF-2 tornadoes that sweep through the area. Because of the frequency of tornadoes in the city, it is important for all locals to establish places to take shelter in the likely event of severe weather. Since the weather can stay mild through the winter months, it is important to practice tornado drills throughout the year.

Wondering what the best time to visit Dallas is? For most tourists, avoiding heat and extreme humidity is a priority. As such, it is wise to skip a visit to Dallas between June and August. Instead, planning a visit during the ultra comfortable months of March, April, September, and October is ideal. With average temperatures in the 70s and 80s, spring and fall are popular times to visit Dallas.

Planning to become a new resident of Dallas? With so many mild and comfortable months, as well as ample sunshine, the climate is highly desirable. Make your move to Dallas smooth and stress-free with relocation services from our team at Brothers Moving & Storage. With over 10 years in business, and with more than 10,000 customers served, you can have peace of mind when working with our movers. Contact us today to learn more. 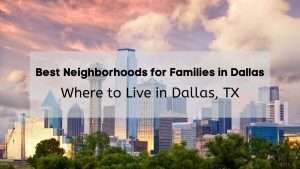 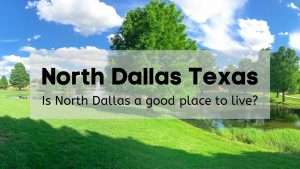 TweetShareSharePin0 SharesAs one of the biggest cities in Texas, Dallas is known for being home to the Dallas Cowboys football team, a thriving arts district,