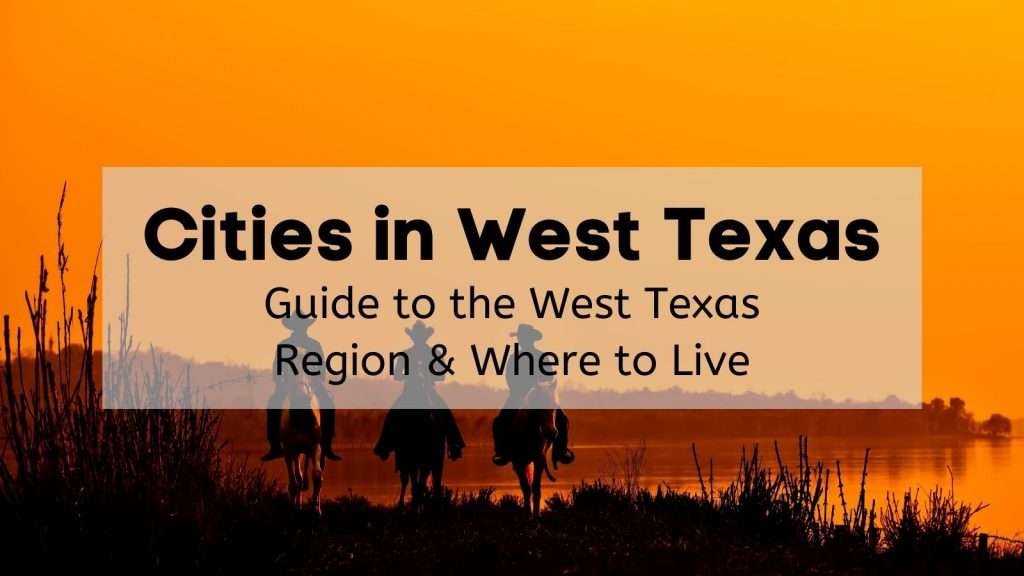 Are you just visiting the region or considering living in West Texas full-time? The desert region of Texas doesn’t get as much attention as the Gulf and Central Texas cities like Houston and Dallas, but West Texas has everything you’re looking for. Imagine wide-open spaces with colorful desert vistas, history and culture at your fingertips, and unparalleled recreation – not to mention great job opportunities – all combined with an affordable cost of living.

Here’s a look at the largest West Texas towns and cities to help you plan your visit – or relocation!

Introduction to the West Texas Region

West Texas is a large region of Texas that covers the semiarid and arid areas west of Sonora and Wichita Falls. This diverse area is the driest part of the state and more similar to Southwest states like New Mexico in its climate with closer ties to its ranching history. West Texas towns and cities offer affordable, safe living for families, retirees, and singles with diverse cultural, recreational, and educational opportunities.

What Is Considered West Texas?

Second only to Alaska in total area among U.S. states, it’s no surprise that Texas is split up into multiple regions based on geography and population. The most accepted regions of Texas include:

There is no consensus on the area of Texas that’s considered “west;” you can ask five Texans and get five different answers! However, West Texas is usually not considered part of the South thanks to its desert climate that makes it more often associated with the Southwest.

That means it’s easier to tell in person when you’re in West Texas as the oak trees disappear, the ground gets dry, and the horizon becomes endless. You can also look closely at a physical map – West Texas starts where the green gives way to tan and then a darker beige. 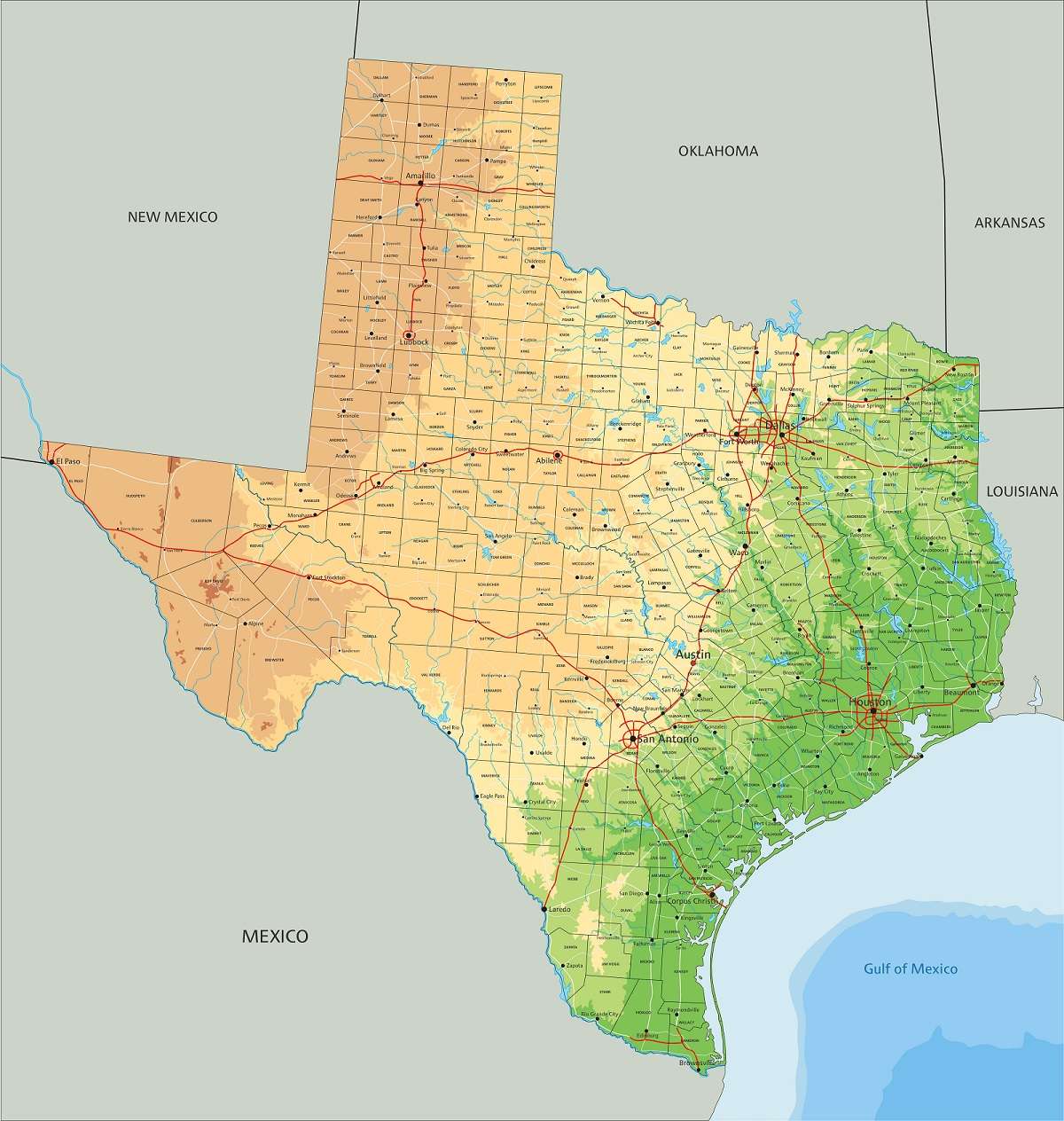 Depending on how it’s defined, there are anywhere from 30 to 70 counties in West Texas. The Texas Comptroller states that the West Texas region has 30 counties and three metropolitan areas (Midland, Odessa, and San Angelo). It notably doesn’t include areas like Lubbock which are widely considered part of the West Texas area and separates the Far West Upper Rio Grande and High Plains areas.

There are only 12 counties in the region with a population of at least 25,000. The largest West Texas counties include the following.

There are 15 other counties in West Texas with a population of at least 10,000 including Andrews, Callahan, Comanche, Dawson, Deaf Smith, Eastland, Gaines, Hockley, Jones, Nolan, Pecos, Reeves, Scurry, Terry, and Ward.

El Paso is by far the largest of all West Texas cities with a population larger than the next five cities combined. El Paso is known for its federal and military presence with Fort Bliss just outside the city limits and its strong American/Mexican culture with Juárez just across the Rio Grande. Combined with neighboring Las Cruces, NM, the El Paso—Juárez—Las Cruces international metro area has the Western Hemisphere’s largest binational and bilingual workforce. El Paso is one of America’s safest large cities and home to some of the top attractions in the West Texas region like the El Paso Zoo and Botanical Gardens and the Sunland Park Racetrack & Casino.

Best known as the birthplace of Buddy Holly and home to the Buddy Holly Center, Lubbock is also home to the first Cultural District in the state! Lubbock is one of the best places to live in West Texas for families, artists, musicians, and students thanks to its many cultural attractions and family-friendly amenities. From the West Texas Raceway to Joyland Amusement Park and the Science Spectrum & OMNI Theater, you’ll always find something new to explore.

Lubbock is also home to Texas Tech University with over 36,000 enrolled students and it’s part of the High Plains region with six local wineries to visit. Over 90% of the wine crop of Texas is grown here!

If that isn’t enough, Lubbock is one of the most affordable places to buy a house in West Texas with a median home price below $100,000 – a far cry from the shocking price jumps in cities like Austin and Dallas!

One of just three cities in West Texas with more than 200,000 people, Amarillo is famous for its Wild West attractions along Historic Route 66. The Yellow Rose of Texas has more to offer, though; it’s the gateway to Palo Duro Canyon State Park and the largest city in the Panhandle. Families love attractions like the Amarillo Botanical Gardens and the Wonderland Amusement Park plus fun museums like the Cadillac Ranch.

Amarillo is one of the best cities in Western Texas for nature lovers with equestrian trails, amazing hiking, and the feel of a small Western town yet all the amenities you need for a great quality of life.

Known as the Tall City for its downtown skyline visible for many miles, Midland is a major financial, trade, ranching, and energy hub of West Texas about halfway between El Paso and Fort Worth. It’s the anchor city of the Midland—Odessa metro area with a combined population of 340,000.

Learn more about why you’ll love living in Midland with our complete guide!

Abilene has a fun claim to fame as the Official Storybook Capital of America. It’s home to a large public collection of storybook sculptures including six Dr. Seuss characters. It’s often rated as the best place to live in West Texas for families with great schools and amenities like Primetime Family Entertainment, Frontier Texas!, the Abilene Zoo, and the National Center for Children’s Illustrated Literature. There are many entertainment and educational destinations in this mid-sized city plus great outdoor recreation at Lake Fort Phantom Hill.

The city is about 150 miles west of Fort Worth and one of the most eastern West Texas cities. Abilene is a major transportation, medical, and commercial hub of a 19-county region known as the Texas Midwest or Big Country in the Central Great Plains area. It’s also home to the Dyess Air Force Base with over 5,000 employees.

Part of the larger Midland—Odessa metro area, Odessa, like Midland, has strong ties to the Bush family as the former home of First Lady Barbara Bush and presidents George W. Bush and George H.W. Bush. Historically, Odessa has been strongly tied to the region’s oil industry, but it’s made great strides to diversify its economy in recent years with healthcare and education now accounting for major employers.

Odessa is one of the best West Texas towns for families with great options for education. The city boasts several higher learning facilities including the University of Texas of the Permian Basin, Odessa College, and Texas Tech University Health Sciences Center Permian Basin Campus. There are also many private schools for families to choose from and a host of highly rated charter schools.

Learn more about what makes living in Odessa, TX so fantastic!

San Angelo is known for one of the country’s largest rodeo competitions, the San Angelo Stock Show and Rodeo, and its ranching history. Located on the Concho River, in the Concho Valley, San Angelo is situated between Central Texas, the Osago Plains region, and the Permian Basin, the latter of which is home to the Midland—Odessa metropolitan area.

San Angelo is beautiful city with tons of cultural and historic attractions that bely its relatively small size. The city has a strong arts and cultural scene with Ballet San Angelo, the San Angelo Symphony, and the Angelo Civic Theatre, the state’s oldest community theater. Angelo State University has an undergrad enrollment of more than 9,000, nearly 10% of the city’s population, while the Goodfellow Air Force Base serves a population of 5,500, including more than 2,000 students.

Fort Concho is one of the city’s main attractions. Established in 1867, the fort played a major role in settling the Texas frontier. The International Waterlily Collection in San Angelo is a must-visit for nature lovers with one of the largest waterlily collections in the world.

Find out more about what living in San Angelo is like with our in-depth guide!

The small city of Del Rio, about 152 miles west of San Antonio, is one of the best West Texas cities for outdoor adventure and the arts. This frontier town is famously home to the Laughlin Air Force Base, one of the Air Force’s busiest training facilities, but it’s also a gorgeous oasis with Lake Amistad, one of the largest lakes in Texas, just outside town. Where else can you see some of the country’s oldest Native American cave paintings, have a glass of wine at the oldest winery in Texas, and take in scuba diving and kayaking all in the same day?

Whether you’re visiting or moving to Del Rio, you’ll definitely spend a lot of time at Amistad National Recreation Area and the Devils River State Natural Area just north. A bit further west takes you to Seminole Canyon State Park with prehistoric cave paintings. Right in town, visit the historic Brinkley Mansion then slow down for a picnic at Moore Park, a scenic community park with a pool next to the railroad bridge.

One of the largest suburbs of El Paso, Socorro is a safe, family-friendly West Texas city right at the borders of New Mexico and Mexico. It’s home to the second oldest Texas mission and one of the best examples of Spanish mission architecture in the region as well as other historic attractions covering the community’s thousand-year history. This desert jewel hosts tons of community events throughout the year like Winterfest, the Harvest Festival, and a large Independence Day Extravaganza. There’s even several parks packed in the small city including the family-oriented Bulldog Championship Park with a splash pad and turtles and the Rio Bosque National Park with wetland habitats to explore.

Big Spring is the largest city in West Texas between Lubbock, San Angelo, Abilene, and Midland. Big Spring, TX is small in population but big in charm with so much to see and do. Comanche Trail Park is home to the spring that gave the city its name and a municipal golf course and the central Big Spring State Park with a 382-acre recreation area offer plenty of outdoor fun. The city is also home to the Hangar 25 Air Museum and the Howard County Fair Grounds with regular community events.

Map of Cities in West Texas

Already imagining living in West Texas? If you’ve narrowed down your options and chosen a city to call home, give us a call at Brothers Moving & Storage for a free moving quote from our five-star movers. We look forward to taking the worry and stress out of your relocation!