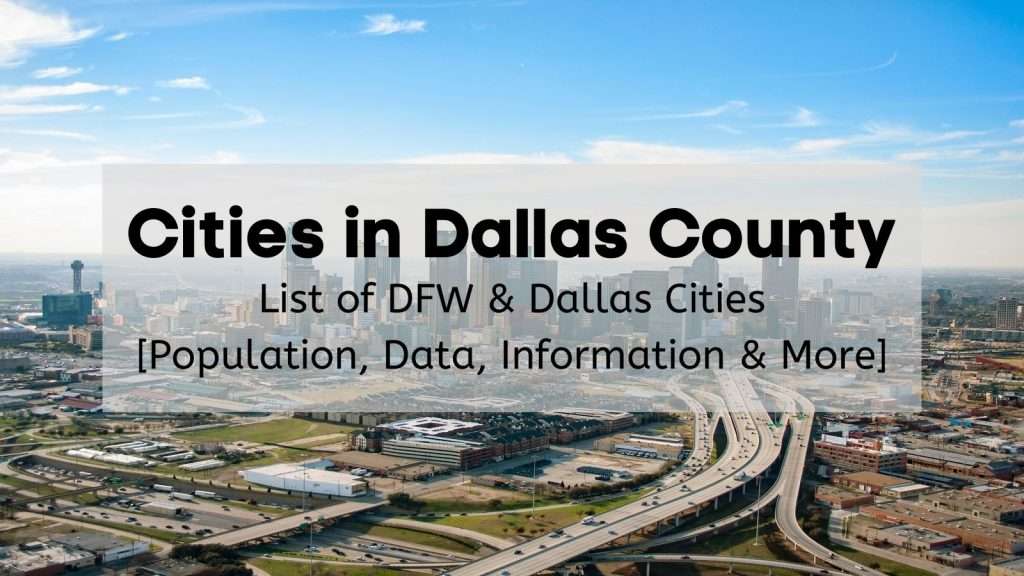 Are you visiting the DFW area or planning on moving to Dallas or one of its many suburbs? A good place to start to familiarize yourself with the area and its attractions is a look at the largest cities in Dallas.

This complete guide covers the 10 largest Dallas cities in Dallas County, Texas including top attractions and what each city has to offer. Demographics and population comes from the 2020 US Census.

The county is home to seven community colleges within the Dallas College system as well as the University of Texas at Dallas, UNT Dallas, and the University of Dallas. It’s served by the Dallas Area Rapid Transit (DART) system and the Trinity Railway Express which connects downtown Dallas and Fort Worth. The Dallas/Fort Worth International Airport, located in Irving, Grapevine, and Euless, is the third busiest airport in the world.

Dallas County is at the heart of the Dallas Fort Worth Metroplex or DFW, a conurbated metro area covering 11 counties and 9,286 square miles. The Dallas – Fort Worth metro area is larger in area than New Jersey or the states of Connecticut and Rhode Island combined.

There are actually two separate metro areas in the DFW metroplex: the Dallas – Plano – Irving metro area and the Fort Worth – Arlington – Grapevine metro area, both spreading across multiple counties.

Dallas is the county seat and largest city in Dallas County. Dallas ranks 3rd among the biggest cities in Texas and it’s the 9th largest city in the U.S. It’s also one of the anchors of the Dallas Fort Worth Metroplex, a huge metro area spreading across 11 counties. It serves as the cultural and economic hub of North Texas with a thriving and diverse economy. The Dallas population is 1.3 million, but there are 7.6 million people living in DFW areas in the Metroplex.

Famous for the Dallas Cowboys and five other professional sports teams, Tex-Mex cuisine, thriving art and music scenes, and world-class attractions, Dallas is one of the top metro areas attracting new residents and it’s easy to see why.

Despite the serious urban sprawl (more than 340 square miles in the Dallas city limits!), the Dallas Area Rapid Transit (DART) system is the longest light rail system in the country. Residents enjoy some of the country’s top attractions like the Dallas Museum of Art, the Dallas World Aquarium, and the Dallas Arboretum and Botanical Garden. 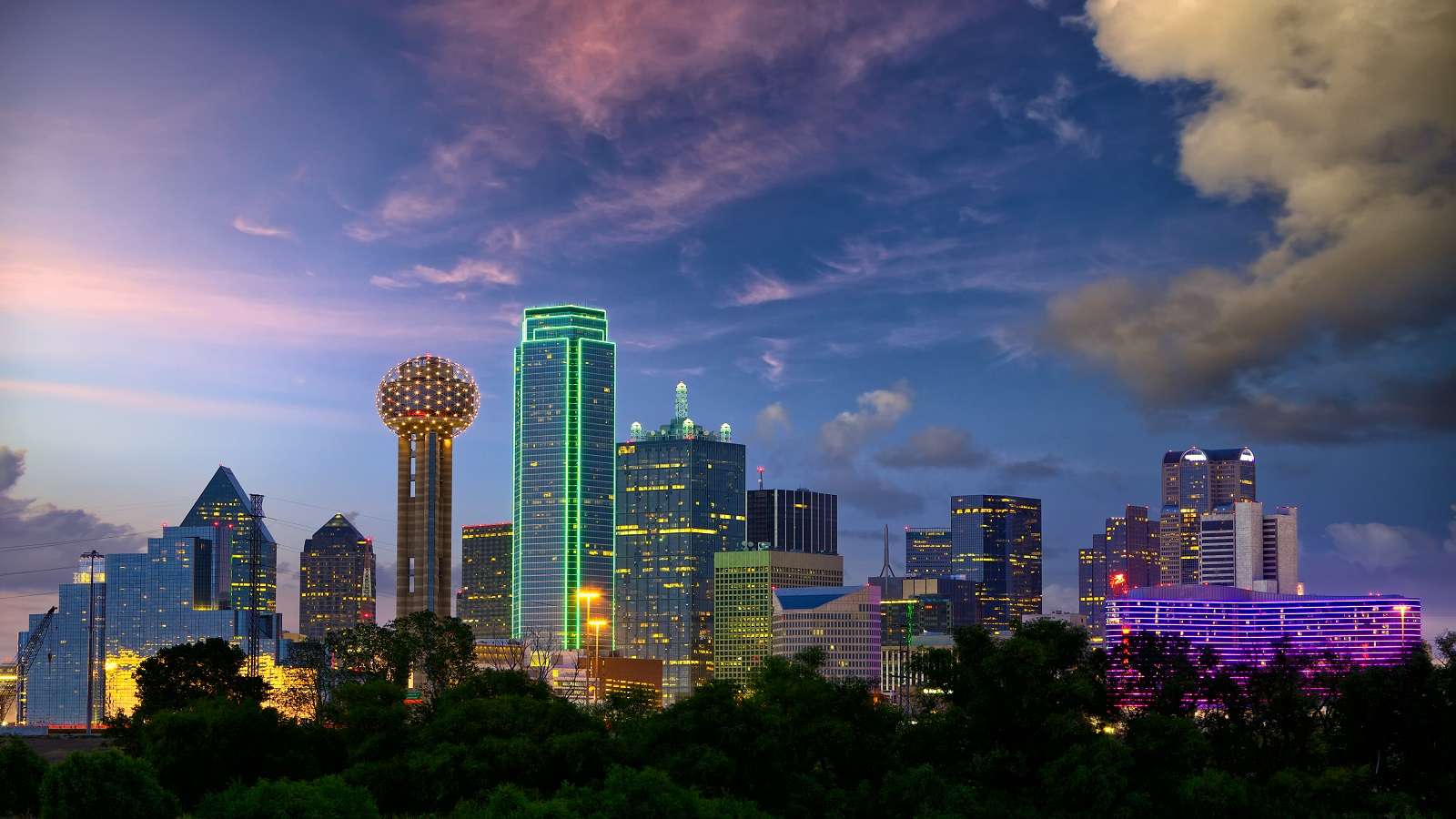 Irving is one of the largest cities in Dallas County and the DFW Metroplex. It’s one of just seven DFW cities with more than 200,000 people and one of the inner ring Dallas suburbs.

Irving is one of the most diverse cities in the country and known for being the international headquarters for five Fortune 500 companies and the Las Colinas mixed-use community. Las Colinas features skyscrapers set alongside picturesque residential areas with lakes and golf courses. The Mandalay Canals offer gondola rides and a paved waterfront trail, and the community is home to Toyota Music Factory, a major open-air music venue.

Since the 2020 census, Garland has fallen to third among cities in Dallas by population. It’s almost completely in Dallas County, but a small portion extends into Rockwall and Collin counties. Garland is known for its manufacturing industry, easy access to downtown Dallas, family-friendly attractions, lake recreation, and excellent parks and green space.

There are tons of things to do in Garland, TX including John Paul Jones Park and Windsurf Bay Park, both on the lake, breweries, the 50,000-square-foot Strike + Reel bowling, theater, and indoor rock climbing complex, and Hawaiian Falls Waterpark, one of the top summer attractions in DFW!

Grand Prairie is one of the principal cities in Dallas Fort Worth. Part of the Mid-Cities region, it’s mostly in Dallas County but extends into Tarrant and Ellis counties. This diverse city is known for its family fun, water recreation, and low crime rate.

You’ll find endless things to do from shopping at the Grand Prairie Premium Outlets and huge farmer’s market to horse races and outdoor recreation in one of the most exciting cities near Dallas. Enjoy the marina, fishing, and beaches at the lakeside Lynn Creek Park plus cabins, camping, water skiing, and swimming at Loyd Park. Grand Prairie is also home to some of the best attractions in DFW like Epic Waters Indoor Waterpark and Ripley’s Believe it or Not! You’ll also be minutes from Six Flags Over Texas in neighboring Arlington.

One of the most affordable Dallas cities, Mesquite home prices are 38% lower than Dallas with less crime and higher household income – yet just 14 miles from downtown Dallas! It’s easy to see why Mesquite is one of the best cities around Dallas for affordable living and a great quality of life.

Mesquite, Texas is mostly in Dallas County with a portion in Kaufman County. Mesquite is famous as the Rodeo Capital of Texas with rodeo performances every weekend from June to August and seasonal shows.

When you aren’t spending the day at the Mesquite Arena, home to the Mesquite Outlaws soccer team and the Mesquite Rodeo, you can let loose at the family-friendly Celebration Station with everything from rock climbing and arcade games to bumper boats and paintballing. Shop ‘til you drop at the Town East Mall with 3 million square feet of retail space, catch a race at the Devil’s Bowl Speedway, and beat the summer heat at the City Lake Aquatic Center.

Carrollton is one of the 15 principal cities in DWF with at least 100,000 residents and it’s spread over Dallas, Collin, and Denton counties. One of the smallest Dallas cities by area, this densely populated community is one of the most affluent.

A post shared by Off to the Park DFW (@offtotheparkdfw)

Carrollton is one of the most diverse cities near Dallas TX and home to Koreatown Carrollton, the largest Korean community in the South! It’s been named one of the best places to live in the U.S. and one of America’s best small cities with attractions that make it popular for families and outdoor enthusiasts. Residents enjoy great golf courses, sports complexes, highly rated Carrollton parks with pools and amenities, and the Oak Hills Splash Park.

The last of Dallas County cities with more than 100,000 people, Richardson is a small, affluent suburb of Dallas adjacent to Garland and Plano. The city is mostly in Dallas County with a portion in Collin County.

One of the inner suburbs of Dallas, Texas, Richardson offers great employment opportunities and very low crime, both contributing to its significant growth. It’s home to the Telecom Corridor with over 5,000 businesses operating in the city limits like Cisco Systems, Samsung, Texas Instruments, Verizon, and AT&T. Richardson is a regional hub for GEICO and the headquarters for Blue Cross and Blue Shield of Texas. The University of Texas at Dallas is also in the Richardson city limits.

Along with its thriving economy, Richardson is known for its diversity. It’s home to the DFW Chinatown and large communities of Indian and Vietnamese Americans. A large share of the nearly 300,000 Arab Americans in Dallas County live in Richardson.

Rowlett is famous for the Waterview master-planned community, one of the only vacation-style communities in the DFW area. Waterview features championship golf, a stocked lake, a surf village, one of the largest private water parks in Dallas, a 1,000-slip marina, and the Sapphire Bay Resort.

A post shared by City Of Rowlett, Texas (@cityofrowletttexas)

DeSoto is one of several Dallas suburbs in the Best Southwest area of DFW. One of the oldest cities in North Texas, the small city is known for its forested parks and hills. It’s home to the Windmill Hill Nature Preserve with 75 acres of hiking and green space and the highly rated Thorntree Golf Club.

Like Rowlett, DeSoto has a high median age, but it’s one of the most affordable suburbs of Dallas and just 16 miles south of downtown Dallas.

Grapevine may not be a large DFW city, but it’s an exciting and rapidly growing suburb ideally located halfway between Fort Worth and Dallas. One of the best cities North of Dallas for commuters, it’s served by Tex Rail, a commuter rail that runs daily between DFW Airport, Fort Worth, and Grapevine. A large portion of the DFW International Airport is in Grapevine.

Grapevine is in the Mid-Cities region of the Dallas Fort Worth Metroplex, one of the safest DFW areas for families. Most of Grapevine is in Tarrant County, but portions are located in Dallas County and Denton County.

Grapevine is called the Christmas Capital of Texas with over 1,400 Christmas events over 40 days. One of the most affluent small cities near Dallas, TX, Grapevine is also known for its wineries, Grapevine Lake with boating and fishing, and the Grapevine Vintage Railroad.

How many cities are in DFW?

There are more than 200 incorporated cities in the Dallas Fort Worth Metroplex! The largest cities are:

What are the major cities near Dallas TX?

Major cities close to Dallas include:

How many cities are in Dallas County?

There are 3 towns and 10 cities in Dallas County entirely and 18 Dallas County cities that are partially in one or more other counties, including the city of Dallas.

Which of These Dallas County Cities Is Right for You?

Are you ready to explore Dallas County yourself? If you’re moving within the DFW area, from another area of Texas, or out-of-state, Brothers Moving & Storage is ready to help! Give us a call for a free moving estimate from our top-rated Dallas movers.